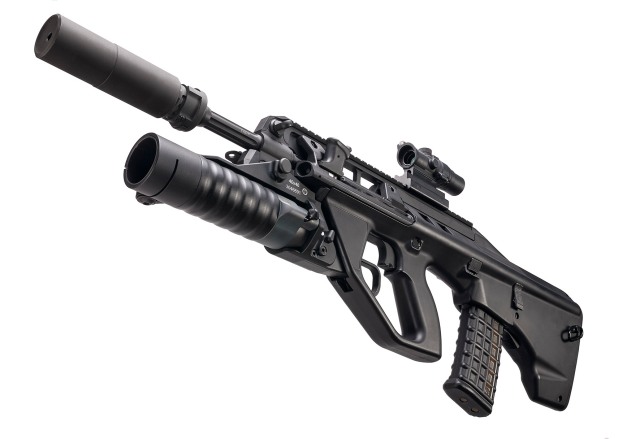 Thales Australia have announced today that they have selected the Steyr SL40 grenade launcher to be paired with their EF88 assault rifle, which is being offered to the Australian Defence Forces under Defence’s LAND 125 Phase 3C program. The EF88 was originally offered with the Madritsch Weapon Technology ML40AUS grenade launcher, however a source close to the project noted that the MWT offering had become the focus of some “significant” engineering concerns. After some modifications, and conducting tests with both grenade launchers, Thales have selected the SL40 to offer to both Defence, and to export customers as part of their F90 system.

The SL40 is a lightweight (1.025kg), side-opening grenade launcher with a double-action trigger, lever-operated safety catch, and 180mm (7”) barrel. Whilst marginally heavier than the ML40AUS, the SL40 is otherwise very similar in physical characteristics. The SL40 is a derivative of Steyr’s GL40 grenade launcher (seen in this Steyr-sponsored video), which has been modified specifically for the unique geometry of the EF88/F90, mounting to the lower STANAG 4694 rail and allowing the trigger to protrude through the rifle’s trigger guard in much the same way as the ML40AUS configuration. The standard GL40 can also be assembled in a standalone configuration; it is not known at this time whether a similar configuration will be available for the SL40.