Differential Identification of White Phosphorus and ZAB submunitions in Syria

There have been a number of claims, both from the ground in Syria and from media abroad, that Syrian government forces have been using white phosphorus (WP) munitions to target rebel positions or civilian populations. Unfortunately, these reports appear to be confusing the appearance of ZAB series cluster bomb submunitions (likely ZAB-2.5 submunitions) with that of certain WP munitions. To date, I have seen no evidence of WP use by either side in the Syrian conflict. Update16/12/2012: I have observed what is likely limited use of WP munitions in Syria. More here. Note that many sources are still misidentifying ZAB-2.5 subs (and possibly ZAB series conventional bombs) as WP.

This Al Jazeera report is typical of the claims of WP use I have seen to date. Note that the still image at the end of the report appears to show a WP munition, though this is likely a file photo. If someone knows this not to be the case, please get in touch with me.

Famous images and video depicting the use of WP munitions by the IDF in Gaza in 2008/2009 have provided many people with their understanding of the appearance of WP munitions. One of the most recognisable features in these is the many tell-tale ‘snakelike’ trails of smoke associated with M825A1 155mm WP projectiles, and similar. The M825A1 is designed to produce a dispersed smokescreen by ejecting 116 ¾ inch felt wedges impregnated with WP over the target location. These wedges ignite upon contact with the air, and fall to the ground burning. The twisting trails left by this process have earned the projectile the nickname of ‘Medusa’ in some artillery circles. 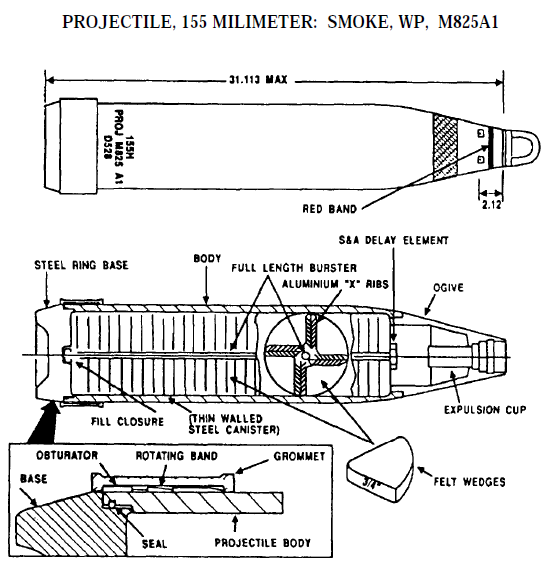 Other WP munitions are unitary in design, however, and have quite a different dispersal pattern. The M110A1 155m projectile is one such example; see this video for an example of its detonation.

The detonation of RBK-250 ZAB-2.5 cluster bombs (and other, similar cluster munitions) exhibits similar characteristics to that of cargo WP munitions, such as the M825A1, when such munitions are employed in an airburst fashion. Because ZAB-2.5 submunitions are ignited upon ejection from the cluster bomb they are carried in, they fall to the ground burning – appearing somewhat like the wedges of burning WP described above. There are some notable differences, however:

The image below shows an M825A1 155mm WP projectile exploding over Gaza in 2009. The video shows what is likely an RBK-250 ZAB-2.5 cluster bomb deploying submunitions over Deir ez-Zour in Syria. 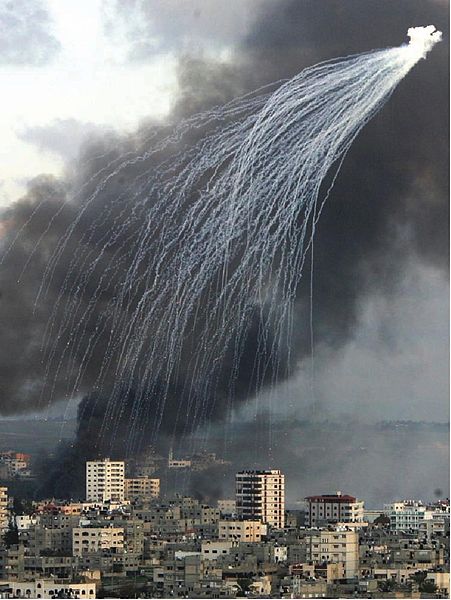 This article should not be taken as a definitive statement that no WP munitions have been used in Syria, simply that I have yet to see any evidence of such. Should anyone have information to the contrary, please contact me!

I will have more on WP munitions in an upcoming article, looking at Israeli 155mm projectiles in the most recent Gaza conflict. Gaza image copyright Getty Images. M825A1 diagram taken from an official US government publication.

As always, an arms specialist (preferably several) should be consulted before confirming a positive ID on any arms or munitions. For journalists, media organisations, and NGOs, the RRMA can assist with this process.

Remember, submunitions are particularly dangerous. Attempts to extinguish ZAB-2.5 submunitions, in particular, could place you at risk of being injured by the bursting charges. As always, if you see any UXO, remember the ‘ARMS’ acronym:

•RECORD all relevant information from a safe distance

•MARK the area to warn others

•SEEK assistance from the relevant authorities