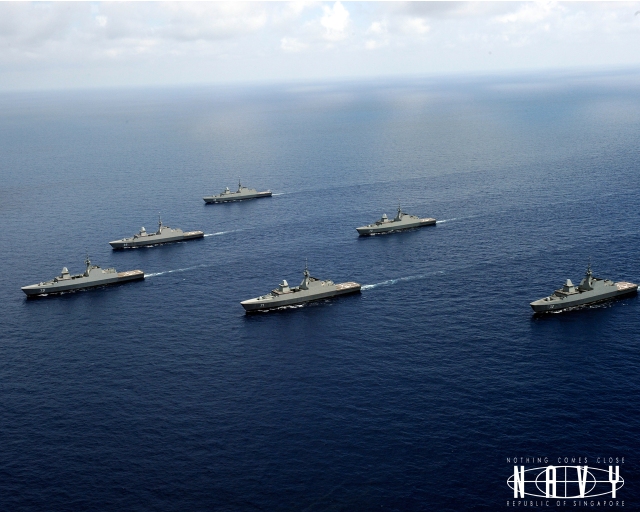 The Formidable class are also highly automated, operated by a complement of only 71 crew (90 including air detachment). By way of comparison, a US Oliver Hazard Perry class has a nominal compliment of 176, an Australian Anzac class a complement of 163, and a French La Fayette class a complement of 141. The Formidable class are designed to operate as the naval centrepiece of the Singapore Armed Forces’ (SAF) Integrated Knowledge-based Command and Control (IKC2) network. Integrating the advanced sensor packages and armaments of the ships to give commanders the ability to rapidly assess the battlespace and respond accordingly was a key design focus for the project. Dr Kenneth Kwok, Programme Director for Information Exploitation at the DSO national Laboratories noted: “The frigate has many state of the art weapon systems and sensor systems, but it is really how you put them together and integrate them into a fighting system that makes the difference”.

Six Formidable class frigates were built, with all but RSS Formidable being built by Singapore Technologies Marine (ST Marine) at their Benoi Shipyard, in Singapore. Construction of the class ran from late 2002 until mid-2006, with all ships being commissioned by January 2009. All are currently active, and form the 185 Squadron of the Republic of Singapore Navy (RSN). The RSS Formidable was Singapore’s contribution to the forces conducting RIMPAC 2012, operating in conjunction with participants from twenty-one other nations. Singapore’s incumbent Minister for Defence, Dr Ng Eng Hen, has confirmed that a Formidable class frigate (and the attached S-70B) will soon be deployed to the Gulf of Aden as part of Singapore’s contribution to CTF-151.